Henry made many references to his family throughout his diaries. From making fence posts and raking oats and with his brother, Daniel, to visiting his sisters at their homes occasionally for dinner. The following photos of Henry and his family were provided by his great grandchildren, who also identified the family members and dates. Feel free to visit the Schweigert Family Photo Album as well.

These images help to illustrate the social and scholary activities of Schweigert that he referred to in his daily writings. 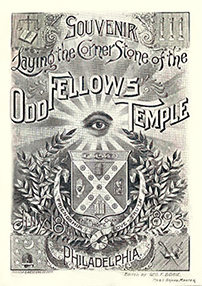 The image on the left is from the cover of the souvenir book from 1893's Odd Fellows Temple cornerstone-laying celebration. Schweigert's references to the Independent Order of Odd Fellows are numerous in 1869's diary entries. Although it is not confirmed that Schweigert attended this cornerstone laying celebration in 1893, if he was still active in the organization, he would have known about the event and the subsequent construction of the building. During the summer of 1869, Schweigert would work on the farm during the week, doing odd jobs and going to the Pottsville market with his brother. On his visits to Summit Station, Schweigert would often visit his sister Sarah and her husband, Jonathan Kremer, in addition to his regular Odd Fellows meetings in the Farmers' Lodge, No. 649.

The Odd Fellows are still in exisitence today, with roots that date back to eighteenth century England. The I.O.O.F. believed in the education the country's poor children, which may explain his chosen career of school teacher. The Odd Fellows also had degree-conferring rituals, in which Schweigert obtained the fifth degree.1

Originally a benevolent society created to provide aid to those in need, the organization grew to be a fraternal charitable society whose motto is, "Friendship, Love, and Truth."2 Schweigert embodied these characteristics when he visited an orphan's Home in Womelsdorf, with his roommate, Mr. Morgan. 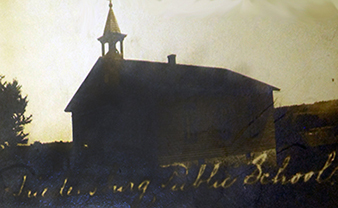 The postcard on the left was found tucked inside a journal from 1870, however the exact date is unknown. Schweigert began teaching school in the 1870s in Friedensburg, after attending Palatinate College. Schweigert attended and taught Sunday school at what he referred to as "School House No. 5" in Friedensburg. The town was officially established in 1827 as part of Wayne Township in Schuylkill County. Although a small farming community that only had fifteen houses and seventy-one inhabitants living there in 1880, Friedensburg had some features of larger cities. The town had, "a tannery, a store, a shoe store and shop, a harness shop, and a wagon and blacksmith shop," as well as two hotels.3 By 1880, Schweigert had moved away from Friedensburg to the nearby communities of Bethel Township in Berks County and Jackson Township, Lebanon County. In his later years, Schweigert moved to Philadelphia to live with his son Milton, until his death in 1923.